According to her introduction video, she has mentioned she is living around the mountains near a forest of elves, and lives at her grandfather's log cabin. One of the rooms was refurbished to give it a more Japanese-like feeling to it, as portrayed by her second room background.[16]

White-haired animal-eared otaku fox. She loves talking with people and will be happy if you give her the time of day. She aims to become a top otaku idol while enjoying each and every day.

Shirakami Fubuki's fans and members are called the same name, Su-Corns (すこん部) . Members are defined by the growth starting as a corn and having Kurokami as an icon past a certain month in. She thanks new members by saying "Thank you for membership!" and rarely reads out Superchats unless the message piques her interest. In certain streams if she's feeling happier than usual, she ends it in a different way where she calls out every new membership and reads all Superchats before ending it with a good-night/good-bye message.

The Su-corns did not have their own design since Fubuki's debut and were always depicted as men with corn cobs as their heads. Despite their similarities, Su-corns and Oruyanke are not the same mascot. The two versions of the Su-corn mascot designed are for her Japanese fanbase and her Overseas fanbase. The Japanese fanbase version dons a sky-blue scarf whilst the Overseas fanbase version, dubbed Friend, dons a navy blue ribbon[55].

Shirakami Fubuki was part of a collaboration event in Dawn of the Breakers with Nakiri Ayame, Oozora Subaru, Sakura Miko, Akai Haato, and Natsuiro Matsuri. The event ran from September 12th, 2019 to October 31st, 2019.[56] 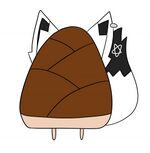 Kurokami is Fubuki's alter persona, appeared at some point in February of 2019. She formally made her debut in September 07th 2019. [72] She has a more aggressive and harsh nature in contrast to the shy and calm Fubuki everyone knows, often not having any tact, coming off verbally strong to people, pushes her work to other people and absolutely hates doing embarrassing things.

After a collab stream with OKFAMS over at Ookami Mio's house, Fubuki stated in her stream she couldn't stream so on the next day Kurokami took over for a single stream of her playing an RPG maker game. [74] She also recently did an independent stream, doing Missing Children and promptly being frustrated by the game throughout the stream.

The Many Variants of Shirakami Fubuki[edit source]

Shirakami Fubuki is known to hold many forms and appearances, other than being simply "Fubuki" and "Kurokami", she has shown to pretend to be a cat once during a stream, as well as a Yukkuri-head, a shark, an eel, a fish, a pigeon and a crab (karkanos from ARK).

The following is a list of original songs by Fubuki.

Retrieved from "https://hololive.wiki/w/index.php?title=Shirakami_Fubuki&oldid=37459"
Categories:
Cookies help us deliver our services. By using our services, you agree to our use of cookies.