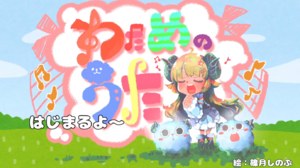 Watame no Uta (わためのうた, shortened as WataUta) or Watame Song Corner in the official English translation, is a now defunct short video series by Tsunomaki Watame. It used to come out every weekday, then it was moved to every Monday until eventually discontinued.

It usually consisted of a TV-size song, then a full length song, continuing into Tsunomaki Janken and then Messsage of the Day.

The video opens with 2 songs covers. A TV-size or a short version, and a full length song cover. 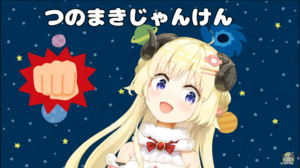 A popular segment in the video where Watame will play Rock Paper Scissors with the viewers by doing a small intro and then showing one of the options on screen. The result may sometimes be something completely unexpected such as an index finger or be interrupted by another Hololive member resulting in them doing it instead of Watame.

Sometimes Tsunomaki Janken is a "fast-Janken" or it will be replaced with a boss version where the usual BGM is replaced by a more intense version with special effects overlaying the screen.

A segment in which Watame explains the instructions for an exercise or "exercise" that seems to be impossible to perform.

Message of the day

If you ever want to tie your hair and you're out of heir ties, never do it with a rubber band. Bad things will happen. - Kiryu Coco

A segment near the end of the video where a guest Hololive member will offer a short "insightful" message, usually by Kiryu Coco.

Retrieved from "https://hololive.wiki/w/index.php?title=Watame_no_Uta&oldid=12966"
Category:
Cookies help us deliver our services. By using our services, you agree to our use of cookies.