From Hololive Fan Wiki
Jump to navigation Jump to search
The printable version is no longer supported and may have rendering errors. Please update your browser bookmarks and please use the default browser print function instead.

"Ex-military who had been fighting for around 5,000 years in a parallel world. Had recently retired from service and was sightseeing in Japan when he was scouted by Shinove.
Was introduced to retro gaming and has been hooked ever since."

Aragami Oga「荒咬オウガ」born January 15, is retired warrior - now part of the Holostars' TriNero group. Starting his Twitter activity on April 27 2020, he was last to debut from the group on May 1 2020[3], making up for it by actively interacting with fans and other VTubers on Twitter while cheering on debuting members of TriNero.

Oga showed a lot of creativity ever since his debut, taking the future fans by surprise with a RPG Maker intro for his first stream and later admitting to drawing most of his visual assets and stream overlay by himself[4], with frequent voice-acting on in-game lines and occasional singing skits on his Twitter later on. He plays retro games a lot, being very knowledgeable about them and having considerable admiration for retro game consoles. Sometimes he’s too keen on interacting with fans which results in frequent guerilla chat-streams.

Oga's favorite phrase is "Majikayo"「マジかよ」with a meaning of "Seriously..?". Among his favorite manga series such titles as Dragon Ball, World Trigger and serializations from Shonen Jump magazine.

He was initially described by other members of TriNero as "very weird person". Oga is man of calm demeanor, speaking with a deep, soothing voice while treating fans very kindly which builds up a warm and calming atmosphere on his streams. He is trying to forge friendly relationships with his fans, being sad to notice, that after his debut stream many fans switched from -kun「くん」to -san「さん」suffix while addressing him[5], making the comments feel a bit more distant. 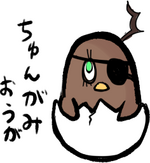 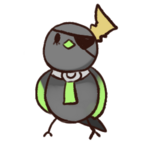